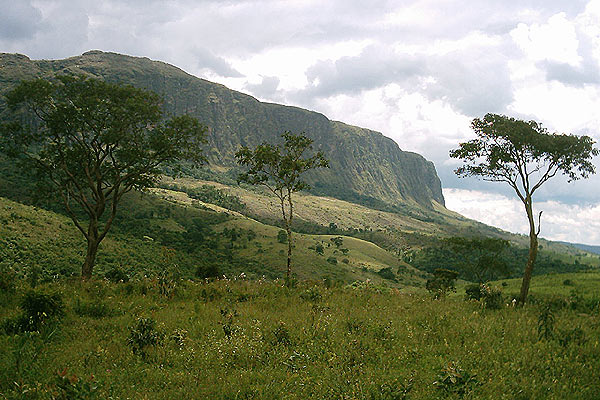 The small town of Sao Roque de Minas makes a good base to bird in and around this national park. I came here from Rio de Janeiro and went from there to Belo Horizonte on a 'Util' bus leaving Rio at 8am, taking 6 hours and 20 minutes and costing R56.50. From Belo Horizonte I went to Piumhi on a 'Gardenia' bus which left at 6:30pm, taking 4 hours and costing R39. There was no bus to Sao Roque that day so I stayed overnight in a 'Dormitorio' next to the terminal costing just R8. The 'Transimao' bus to Sao Roque leaves at 6:30am, takes about 2 hours and costs R9.50. In Sao Roque, there are several places to stay. The nicest is Chapada de Canastra but I stayed at the cheaper Faria's Hotel at R15 with breakfast. Both are at the bottom of the town which is on a big slope. There is also a nice restaurant in town and a place to do internet.

The most famous bird in the park is the critically endangered Brazilian Merganser. It is apparently difficult to find but I saw it on my second day within walking distance of the town and watched it for an hour down to 10m. There are 2 ways to get to the site. First, walk from Faria's towards Chapada and carry on. The paved road ends and a dirt track continues. It goes up to where you have a view over a bend in the river. Mergansers have been seen here. Carry on walking (either by the side of the river or just on the track) until you get to a bridge over the river. Here, the idea is to reach a farm on the left bank facing upstream. It seemed easier to walk along the right side and cross over later on. This may involve some climbing over fences and other improvisation. If you make it to the farm house ask for Luiz, who runs a camping site, and for the path to the 'Cachoeira'. He also probably knows where the birds are. You could tip him or buy one of his sculptures. You go through a fence, from where there is a clear path along the left side of the river. Head to where the valley narrows and becomes a kind of canyon. At the narrowest part, look down and you should see a kind of natural pool between 2 sets of rapids. This is where the mergansers were between 10 and 11am. Instead of coming from the bridge, you can reach the farm house/camp site (Camping da Picareta) from the road towards the national park. At the top of the town, turn right at the cemetery and carry straight along (listen out for Red-legged Seriema), after 2-3kms turn right at the sign for Picareta. Foillow this along to the house and follow the previous instructions. On the last section is some nice habitat on the left where I saw Black-throated Saltator, Spot-breasted Woodpecker.

I spent 1 day birding in the park which had fewer but some different birds. It opens at 8am and the entrance is about 7km along from the road previously mentioned. I walked from town which was pretty tiring, but you could easily hitch with IBAMA staff who pass by in the morning. The road up has good birding though and I saw Firewood-gatherer, Pileated Finch, Toco Toucan, Crested Black-Tyrant and Cinnamon Tanager. Around the farm house at the Picareta turn-off, check the palms for Golden-capped Parakeets. A bit further up there is another right turning, this one to the 'Capao Forro' waterfall which I reached a different way. It is 3R to get in but maybe another place to check for mergansers. Up towards the national park entrance you get a wonderful view over the valley and I saw Black-chested Buzzard-Eagle soaring and large flocks of Great Dusky Swifts which roost in the waterfall.

After paying your 3R entrance fee keep on walking up to the Visitors centre where they have a nice exhibition photos. Walking further up you get to nice grassland but it had all been burnt and had many beautiful flowers. Along here I saw Stripe-tailed Yellow-Finch (common), Burrowing owl (perching on termite mounds), White-vented Violetear, Gray Monjita, White-tailed Hawk and heard Rufous-winged Tinamou. I walked as far as the origin of the Rio Sao Francisco where the stream goes under the road and there electric wires pass over head. This forest here is supposed to harbour Brasilia Tapaculo but they did not respond to playback for me. Here I saw Tawny-headed Swallow.

I saw 115 species including 7 lifers 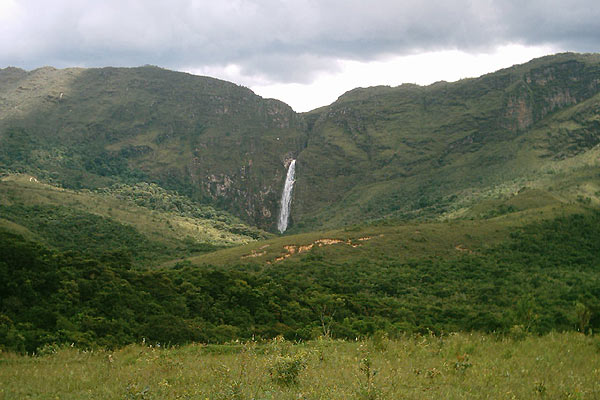 This national park lies 330km SW of Belo Horizonte, at the headwaters of the Rio San Francisco. By bus head for Piumhi and from there get the bus to São Roque de Minas. The bus may get stuck in the mud on this second stretch of road if it has rained for 5 minutes or more, do not worry they are used to it! Where the bus stops (at bus ticket booth) ask for hotel, probably straight on downhill, at the bottom turn left for Hotel Chapado Canastra (US$16 night per person, they speak good English and the hotel has internet which you can use free even if you are staying elsewhere!) or go right and round a dogleg and carry on for 400m to the unsigned Faria´s Hotel, which is very basic and for US$3.50 includes breakfast only. After booking in to your hotel, go to the IBAMA office at the top of the main street and ask for the latest sightings of Brazilian Merganser.

To get to the park you really need 4 wheel-drive hire car (do not take a 2 wheel-drive hire car in) or a taxi (not all will take their cars in) or there is a tour company at the bottom of the main street across from the garage which has 4 wheel drive and guides. The taxis, found in the main square will probably ask R$120 Brazilian (cUS$17), to take you to the park gate and return for you at night, do not accept this barter and you should be able to get one to take you into park all day with you for R$100 (cUS$15) this is obviously much better, as you need a vehicle to get around this huge park.

If going on foot or indeed by vehicle into the park and require a good guide, ask for Brito (the taxi drivers will know him). He knows the area well and will know where the latest sightings of mergansers have been. Be warned however, the walking can be long and strenuous where he takes you, and the mergansers are just as unpredictable for him.

Be aware that some of the best areas for the merganser are outside the park. Indeed one of the best places has been at the river right on the W edge of town, literally 15 minutes’ walk from the hotel. Head from Faria´s past the Hotel Chapado Canastra and continue on this bottom road to its end, there is a twisting track down a hill which then straightens out, the track branches here, but keep left and head to the very high bank overlooking the river bend. Below on the opposite side of the stream is the most popular local picnic area and it is packed on weekends, and there is usually someone there any day of the week. On this bend I saw 7 Brazilian Mergansers on the sandbank in the middle of the stream; they then swam away around the bend and went under tall overhanging trees. They are most active at first light being shy birds and so you have to be there early before any people are around and they spend much of the rest of the day hidden under overhanging riverside vegetation. This information was given to me by IBAMA staff, who also said there had been 8 mergansers in the same area 2 weeks ago, seen by Brito. It had taken me 5 days to find them and I had already done this area 3 times. The mergansers are also seen further along this stream, follow the track for about a km to a bridge, they sometimes fly by here and you can see long stretches of river. Crossing over the bridge you can continue to follow the stream along the other bank with good views of long stretches of undisturbed stream. Eventually you will come to a stone wall and the river forks, it is possible to continue for a similar distance by crossing the river and following the left branch to the waterfall, but it goes through private property and you would probably need a guide, who knows the owner and the way (Brito).

Another area for the merganser, where they had been seen just the previous day, and where I would have gone had I been able to find an available taxi, was just into the park behind the visitor centre on a quiet stretch of stream. IBAMA staff also informed me only half the people who ever came to see the mergansers ever did because they did not allow enough days.

To reach the biggest waterfall, the Casca Dánta (186m) drive from town and around the southern edge of the plateau and follow the signs to the waterfall. It can be good birding if it is not busy. There are places along the main road where you can view the river for mergansers but there are also 2 right turnings before the waterfall, one to a bridge where you can see a good stretch of river, the other to a shop-restaurant where you can walk through the fields to the river and to the right walk about 1km till you get to an adventure rope bridge. Going left there are still good views of the river but you cannot get as far.

The Bazilia Tapaculo can be located around 4km past the main administration building or drive NW across the plateau to Fazenda das Pedras. Other species such as Sharp-tailed Tyrant and Stripe-breasted Starthroat should be looked for along the way.

There is other good birding not far from Faria´s Hotel, from the hotel turn right to the junction and turn left past the garage and over the bridge at the stream. Look for Sooty Tyrannulet at this bridge, follow the road for 1.5km out of town (look for Black-throated Saltator) in the roadside trees to a fork in the road and take the left fork to the brow of the hill. Just after the brow look to the left in heavily eroded grass scrub for Stripe-tailed Yellow-Finch, although I only ever saw 1 singing male. Walk or drive a further 7km along this road and at a sharp bend there is a sign for a private reserve RNNP Waterfall Cerradão, note it is R$3 (US$0.70) entry fee, so unlike me take some money. Though I do not know what was in the good patch of forest there I had seen Brazilian Tanager on the way.

The cheapest beer in Brazil is out of Faria´s Hotel going right for 20 metres to the first corner shop, RS1.20 for 600ml or 24 pence!

For other species, Cock-tailed Tyrant can be found in open, or light scrub areas on the plateau, as can Campo Miner. Look for Greater Rheas (the boulders that move) and Giant Anteater (smaller boulders that move) on the largest campo grass areas. You probably will not see the mainly nocturnal Maned Wolf. 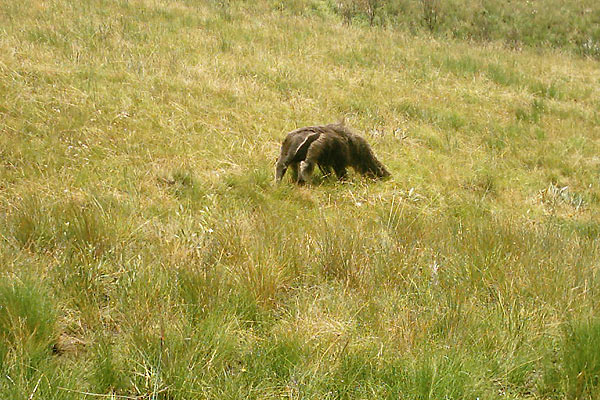