This superb place is set a couple of hours SE of Belo Horizonte, get the bus to Santa Barbara and then a taxi 24km (US$20) to the monastery (Hospedaria de Colegio Caraça) which was built in 1771 and is still a training monastery as well as a large hotel for visitors. It is the best place to stay and 3 excellent meals a day are included in the price, which start at US$23 per person per night. There is alternative accommodation either in Santa Barbara or just outside the park gate for similar price. However staying outside the park requires using a taxi every day and paying to get into the park (US$6) which opens at 07.00, and paying for meals at the monastery.
There are a number of good well marked trails, a well forested one is the short Tanque Grande. Go out the monastery and head back along the entrance road over the stream past the picnic area till you reach a gate set back on left side. Follow the track through here and take the right-hand fork and follow through the wooded area to the reservoir. If you take the left fork at the junction you will head out into the open areas, the path further branches and going right takes you several km to the far end of the flat bowl shaped valley. Going left takes you (eventually) to the largest waterfall. Smaller unmarked tracks branch off in many directions. Other tracks lead up behind the monastery and go up the side of the surrounding mountain, one, the Capelinha Trail goes to a chapel half way up.

Look for Shrike-like Cotinga around the forest at the picnic area, and try for Swallow-tailed Cotinga on the edge of the forest on the Tanque Grande Trail (sometimes high up) also in this latter area look for Crescent-chested Puffbird perched quietly in the mid-canopy. The best trail for Serra Antwren and Hangnest Tody-Flycatcher is through the open area to the waterfall. Also look for Olivaceous Elaenia here. On the long trail to the far end of the valley, you will pass through extensive Chusquea bamboo stands, with many good species possible here. About half a km on at the side of the track there is a boggy patch with rank vegetation on the edge of the wooded area, look low down here for the skulking Red-eyed Thornbird. 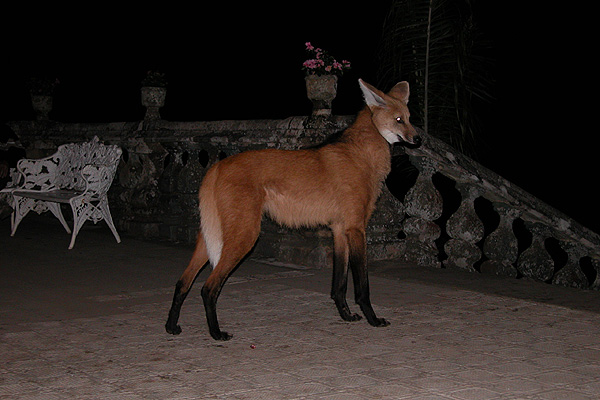 This is a world famous site to see Maned Wolf (above Lauro Paulin, January 2005), being fed nightly on the monastery’s chapel steps. It comes at various hours, usually not before 22.00, and often later when everyone has given up (the food is usually gone in the morning), so you are not guaranteed to see them (there is only one family). I saw a single animal twice in 5 nights.

Masked Titi-Monkey is readily found here, its strange chuckles been heard from dense vegetation, often low down, especially on the Tanque Grande Trail. A little patience is required to see them as they are usually concealed and do not move for long periods.

Send bird and other wildlife sightings in English or Portuguese to This email address is being protected from spambots. You need JavaScript enabled to view it.

REQUEST Information to confirm if path for Red-eyed Thornbird is called Casoatinha, and the name of the trail to the waterfall.