The first account is by Charles Hesse 8th-9th December, 2006.

Itatiaia is between Rio de Janeiro and Sao Paolo. Many buses pass and may agree to drop you here but may charge you the full fare between these cities. Cidade do Aco has direct buses from the terminal in Rio, but only a few. One leaves about 2pm and another at 18:05. It takes about 3 and a half-hours and costs R21. A return bus leaves across from the Rodoviaria in Itatiaia at 15:00. The best place to stay would be at one of the expensive hotels up in the park, like Ype or Simon. Itatiaia has a cheap hotel though and also a bus up into the park so you can visit for the day very easily. When you arrive at the 'rodoviaria' in Itatiaia, cross over the footbridge (passarella), turn right and walk west along the edge of the highway. After about 500m there are a couple of small restaurants, the second which also has some rooms. It's called Pousada Isa but the sign only says 'Pousada'. It is R25 for a basic (not so nice) single room including breakfast which you can eat in the restaurant from about 6am onwards. The bus up to the park leaves at 7am from near the footbridge. Go past this and you will see a bus stop in front of a gas station. This is the stop for the bus back to Rio but not to the park. Walk on about 20m and wait at the bus stop on the road coming out. It takes about 30 minutes to get up to the park and costs just R1.90. This is the bus that the workers in the park and various hotels and shops take up every morning. Get off the front of the bus at the barrier, buy you ticket into the park and get back on.

There are several places you could get off the bus. First you pass the IBAMA buildings across from which I saw Red-breasted Toucan and Dusky-legged Guans. The visitors centre is a further up and from here there is a trail going to Lago Azul, which I wasn't able to locate. The forest around here has some nice birding though and I saw Euler’s Flycatcher. Above this I saw possible Brown-backed Parrotlets flying over in the late morning. One place further up worth spending a day birding is the Tres Picos trail which starts at Hotel Simon. Stay on the bus until the last stop and follow the beginning of the trail across from this huge hotel. It takes a few hours to get to the top but there is a great view. There are also some nice cascades about half way up. Birds seen along this trail included Black Hawk-Eagle, White-throated Hummingbird, Buff-browed & Black-capped Foliage-gleaners, Rufous-tailed Attila, Rufous-tailed Antbird, Fawn-breasted Tanager and Thick-billed Saltator.
I also planned to bird the jeep trail described in Wheatley's guide but this no longer seems open to the public. There is a security guard there to stop people going up. Ask at the IBAMA office if you want to find out about going up here. The guard will not let you past. To reach the beginning of this trail, get off the bus and carry straight on instead of turning up the hill to Hotel Simon. This low road passes the entrance to Hotel Ype and ends at a car park (Magpie Tnager) from where you can walk up trails to some waterfalls. It is worth walking all the way to the car park, or back down as it has excellent birding. Along here I saw Black Jacobin, Ferruginous Antbird, Black-billed Scythebill, Yellow-browed Woodpecker, Spot-breasted Antvireo, White-browed Foliage-gleamer and Scaled Woodcreeper. The trail to the waterfall before the bridge over the river had Olive-green and Chestnut-headed Tanager, Sharp-billed Treehunter and Blue-billed Black-Tyrant.

I saw 116 species including 9 lifers 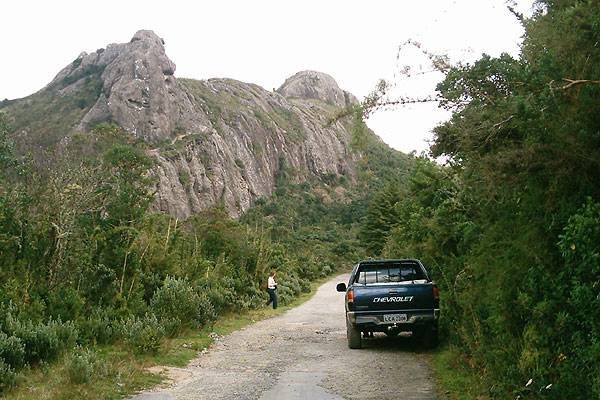 The size of this park in other literature is sometimes given erroneously as 12,000ha. According to IBAMA (and other sources including a rough calculation from any map) the area of the park is 300km2 which by the simple calculation of adding 2 noughts gives 30,000ha.

This excellent national park is reached from Rio de Janeiro by taking the bus to Itatiaia (Resende is the larger town just before here), which is around 175km. A road from the Dutra Highway goes right (N) past the Itatiaia bus terminal and continues for around 5km to the park gate. There was a small tourist information office along here but it is disused and dilapidated (still mentioned in some famous recent publications!).

Continue on the paved roads towards the 3 hotels, the first and cheapest is the Hotel Repouso, the second mid-priced one the Hotel Simón (with orchid house and books for sale) and the third, highest and dearest (starts at cUS$55 per person per night) is the Hotel do Ypê, it is around 4km from the gate to the last hotel. You can pay to use the internet access at least at Hotel do Ypê. The latter hotel is probably the best. If you require a guide for any purpose enquire at the hotels.

There are several good trails around the hotels. Walking back along the road from the Hotel do Ypê towards the Hotel Simón there is a path on the left, take this and it leads to the Hotel Simón, just before the end is a turning to the left and this is the start of the Tres Pico Trail, this is a long trail and you can spend all day on it birding up the mountain. Alternatively, from the Hotel do Ypê turn right uphill and over the Maromba Bridge, there are short trails here to the waterfall, but continuing past uphill will bring you to an IBAMA gate house. There should be no problem continuing past here along the track, where after a while you will reach a right turning, this is the start of the Jeep Trail and it may have a gate on it and be very overgrown, as when I was there, but you can still continue and bird all day along here.

There is another hotel the Hotel Alsene accessible from the road to the summit. To reach it you have to go out of the park and back to the Dutra Highway, and head west (c12km) until you reach the right (N) turning towards Caxambú (BR354), turn here and continue along the twisting road for 26km until you reach the right (E) turning to the summit. The hotel (and other places to stay) is along this road and the road is rough, but the birding is excellent. At the end of the road you will reach an IBAMA guard house preventing vehicle access beyond this point. You can however continue hiking to the summit proper. For good birding, park up here and bird back the way you came, Itatiaia Spinetail should easily be found in the open scrubby areas near here.

The marsh mentioned by Forrester (1993) on the right 6km along the Caxambú road from the Dutra Highway appears sadly to have been mostly drained and fenced off and does not look promising for birds.

There have been 270 species recorded in the Serra do Mar and many of these can be found at this excellent national park.


The marsh mentioned by Forrester (1993) on the right 6km along the Caxambú road from the Dutra Highway appears sadly to have been mostly drained and fenced off and does not look promising for birds.

There have been 270 species recorded in the Serra do Mar and many of these can be found at this excellent national park.