To get to Stephantsminda (Kazbegi of former USSR) you leave the capital Tbilisi and head N for 200km on the old Russian road over the Krestuvri Pass (2395m). Travelling to and from Tibilisi it is always worth taking stops to check the extensive and seemingly largely pristine broadleaf woodlands for a wide range of species. The more sought after being Green Warbler and Semi-collared Flycatcher. There will be Syrian, Great Spotted and Green Woodpecker and Red-breasted Flycatcher and Redstarts and a wide range of familiar species. Around the dam, there can be found Armenian Gull, Dipper and Grey Wagtail. 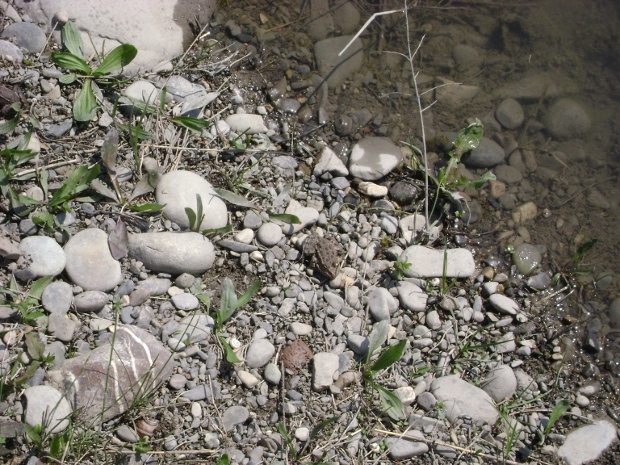 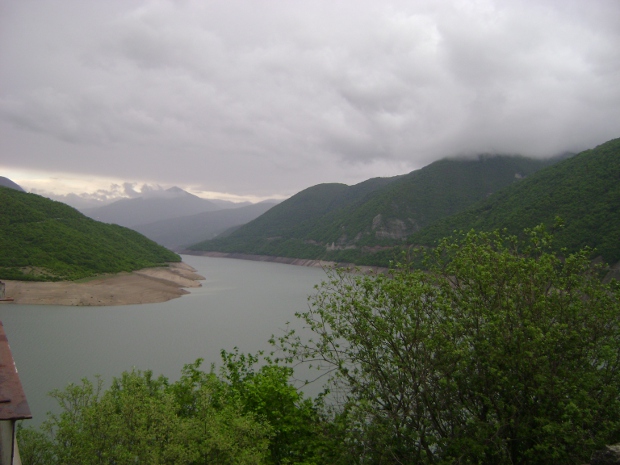 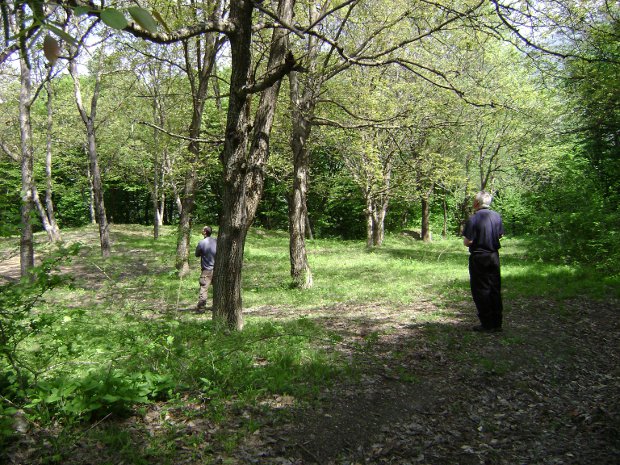 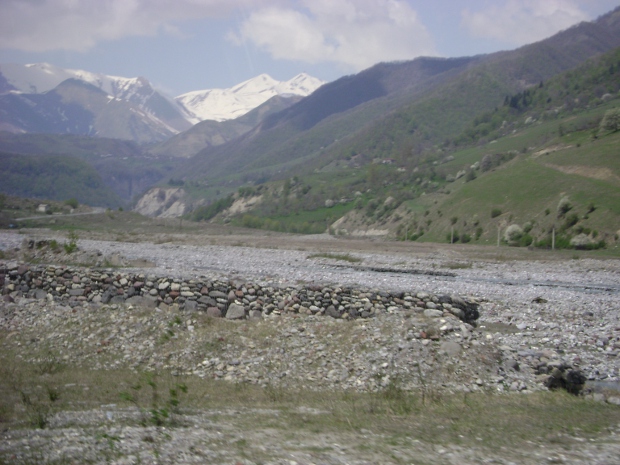 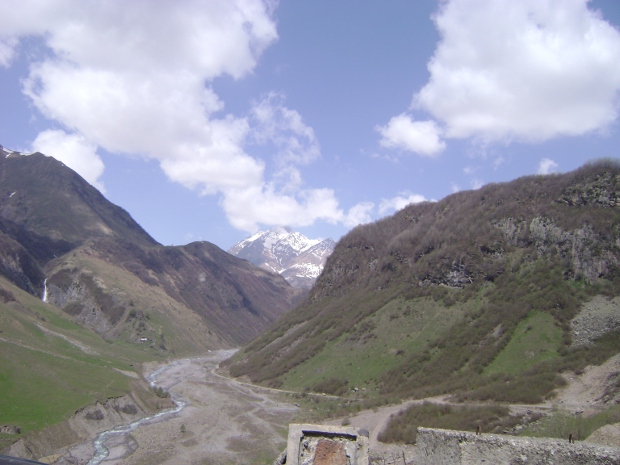 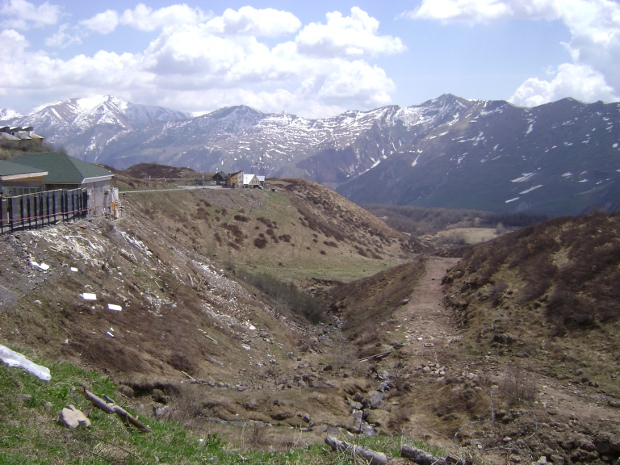 The road is good until you get to the actual pass through the snow fields then the harsh weather and often un-surfaced roads mean 4 wheel drive is an advantage, though vehicles of all types were driven through with care. The many rough narrow tunnels with no road surface protect against avalanches but are the roughest sections. Just before the high point of the pass there is a ski resort, the chairlift and slopes closed in summer, but there are cafes still open for the ever passing vehicles. It is worth stopping here to bird as well, as the edge of the snow fields and boggy pasture can be productive for many Water Pipits, wagtails, Twite, Whinchat and Northern Wheatear. We also saw one Horned Lark and Snow Finch. Above check for migrant raptors (see further down account). 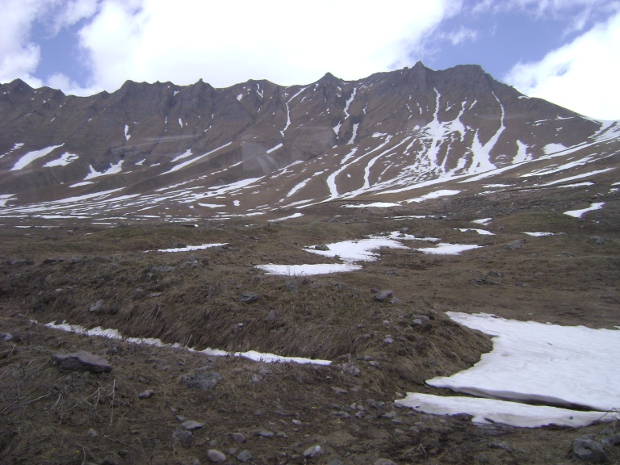 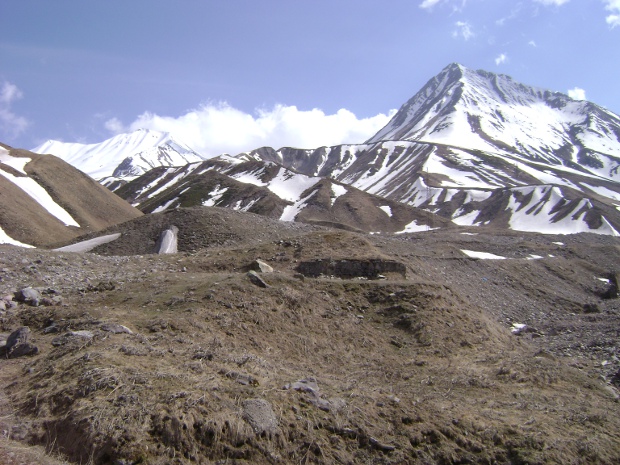 Here at Stephantsminda in the Greater Caucasus Mountains (at 1740m in Khokh Range), only around 20km from the Russian border, there are several places to stay, all fairly basic but not bad. Electrics, such as showers work, food is home prepared plentiful and good and the shops are well stocked with a wide range of commodities, including good beers and good and very reasonably priced home produced wines. We sayed at the Ilia Ecological Centre & State University as it was far up the back streets and so closer to the mountain slopes where we wished to be birding early. This place was good, with large rooms, friendly, helpful staff and good food. It was also, like everything in Georgia, reasonably cheap. 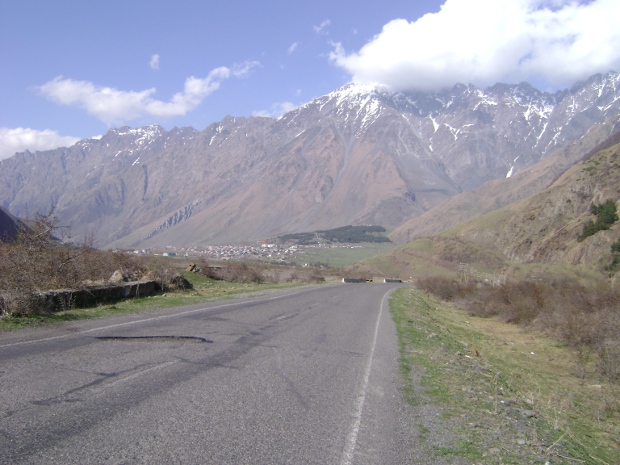 There are a few endemic and other sought after species here, and they can be found in the Kazbegi Nature Reserve. The endemics (or very near endemics) are Caucasian Snowcock, Güldenstädt’s Redstart, Great Rosefinch. These species in summer are found on all the mountains all around, above the tree line and scree zone in the low sparse vegetation and bare jagged rocks and snow above. They come much lower in winter, into the tree line and around the highest villages. These highest villages then are the base from which to see these species in spring, when most birders come. Spring visits enables both to bag these retreating high altitude species and find some of the Caucasus summer specialities in the woods some way lower down the mountains. It is a fine balancing act though to hit it just right and not miss any of the specialities, but the mountains should be done first.

From Stephantsminda, take any one of the tracks out to the pastures and beyond to the scree slopes. The rocky mountain side by a small chapel is particularly productive. If you are able, get as high as you can, near the top of the scree or higher. Now you need good eyes and a powerful scope and patience! The most problematic species, is the one found highest up earliest in the year. Great Rosefinch live on the permanent snow fields at or very near the tops of the highest mountains, venturing lower in winter and harsh weather but very erratic and mobile. During our stay, the only birders to get reasonably good views were some young birders and guide who took a taxi up to the prominent chapel on the isolated domed hill out of town across the river, from where they walked three hours up and into the snow fields and found a small flock which they watched while stood in deep snow. They then had to get back. It depends how fit and determined you are. We had brief fly by views.

The Snowcock and the Caucasian Black Grouse live on the sparsely vegetated rocks and pasture just below the summits, and though difficult to spot due to distance and camouflage can usually be seen after several hours close scanning and attention to calls. An early start is best for these species as this is when they are most active and vocal.

An alternative mountain to try is the prominent domed mountain across the river towards Mount Kazbek with the Gergeti Trinity Church easily visible on top. It is possible to get a taxi to here and so save some walking. We did not do this area however.

Güldenstädt’s Redstart is thin on the ground and like any scarce mobile passerine can be difficult to pin down. The buckthorn around the scree slopes seems to be favoured, and needs checking everyday, or several times a day. The bushes may seem totally empty, until all of a sudden there one is! Here you will also find Caucasian Chiffchaff with its distinctive song and looks, but beware as other Phylloscopus species may be about including Common Chiffchaff (but mainly lower down) and Willow Warbler. There will be Black Redstart and maybe a few Common Redstart.

There are many other good species to keep your interest up while searching these mountains. There can be few places in the world as easy to see Lammergeyer, with at least 1 or 2 seen daily, in fact the whole valley is good for this species. Likewise the more familiar Golden Eagle and Griffon Vulture, while Peregrines and Kestrels stalk the crags. Other raptors should be looked for on passage, passing high along the mountain ridges in mixed groups of 10 to 50. These could well contain Steppe Buzzard, Honey Buzzard and any of the European harriers. There may also be Black, Egyptian or Lappet-faced Vulture, Lesser Spotted Eagle, Long-legged Buzzard, Levant Sparrowhawk and Hobby. Other large passage birds could include storks and Common and Demoiselle Crane. 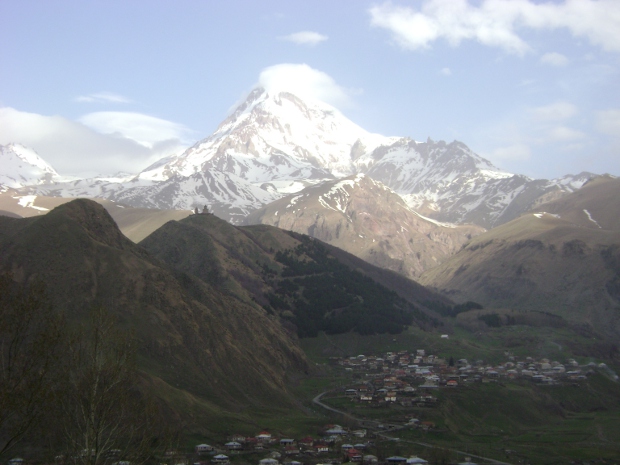 View of tallest mountain at Stephantsminda; Mount Kazbek with the Gergeti Trinity Church on domed mountain in front, Georgia 2012 (BPW) 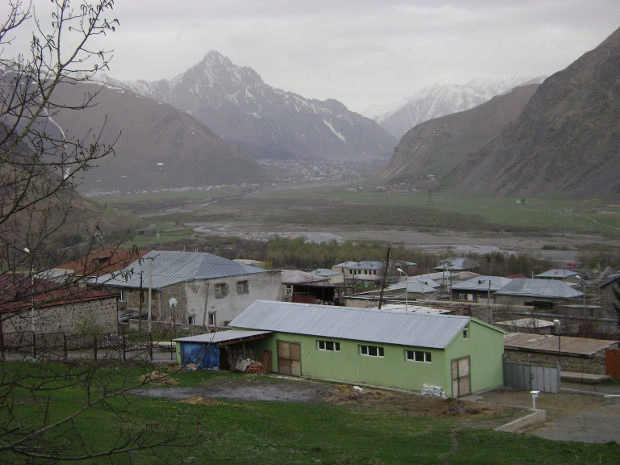 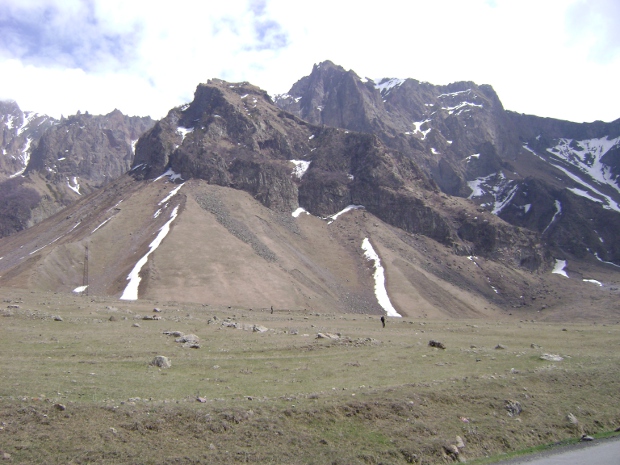 Above the crags look for Alpine Swifts amongst the Common Swift and high migrating European Bee-eater. On the cliff sides look for Blue Rock Thrush, Wallcreeper and Crag Martins. In the seasonal high meadows (the highest pastures behind the village below the scree) there will be an abundance of pipits and wagtails. Most will be Water Pipits and flava wagtails, but there are other pipits such as Tree (not in trees!) occasional Red-throated and less commonly Meadow. Some of the distinctive flava wagtails include Grey-headed, but there are also others. Ring Ouzels and Northern Wheatear are common. Red-fronted Serins are not uncommon, particularly at the edge of conifer plantations, but it may take a while to get decent views and Alpine Accentor may also be found around the scree and pasture.

In the woods and plantations a small variety of common species can be found at low densities. In bolder strewn fields look for shrikes, particularly Lesser Grey and Red-backed and Golden Orioles. We also turned up a Güldenstädt’s Redstart here after a group earlier in the day had a total blank and in fact never saw one all trip. Persistence is the best strategy.

Along the River Thergi valley which the road follows, there are many possibilities, with Common Sandpipers everywhere and Dipper not uncommon. There will be the odd Roller and Hoopoe and small numbers of breeding Corncrakes. Passage birds could include anything from this region.

MAMMALS East Caucasian Tur Capra cylindricornis is the most likely of the goat family here.

REPTILE & AMPHIBIANS Some species of lizard was seen occasionally even above the tree line. Marsh Frog.

Camberwell Beauty was present in small numbers and several dragonflies species were were seen.

PLANTS An interesting assemblage in the alpine pastures, particularly in the less well grazed and wetter pastures. Many plants, such as the buckthorn we could place to family, but all were a little unfamiliar and would reward the keen amateur with a field guide or an expert. We saw many Pasque Flowers Pulsatilla vulgaris, Asphodel spp. Tofieldia and Gentian spp. Gentianella.

Author: BSG. Tour organised and led by Nick Whitehouse and Lance Degnan This email address is being protected from spambots. You need JavaScript enabled to view it.