There is no problem getting a permit from IBAMA (Brazilian Institute of Environmental and Renewable Natural Resources) they speak English and it usually only takes an hour (if the person who deals with it is there). It is acceptable to say you just want to birdwatch, you do not have to be on official business or doing research from a university to stay at their free visitor accommodation. The main consideration though is whether there will be any room, enquire as soon as you can into your trip (by phone if not in person) if there will be any beds available for the time you want to visit. If there are not hopefully you will still have enough time to alter your itinerary to suit, because you do want to bird here. Also if you are visiting Sooretama Biological Reserve get the permit for there at the same time. 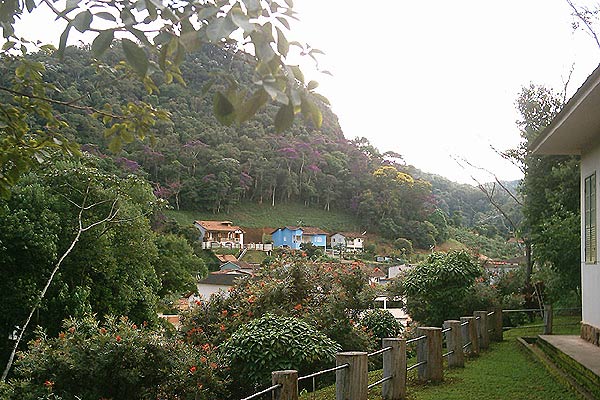 After obtaining your permit in Vitória get the bus to Santa Teresa (photo above), you will need to change buses. In Santa Teresa there are a choice of places to stay. The cheapest as always in Brazil is straight across from the bus terminal, probably badly or not signed and called ‘Workers’ Hotel or Hotel Rondovaria (bus terminal) or Comfort Hotel’. The one in Santa Teresa is as usual up some stairs above shops and costs cUS$5, and is basic. There is another better hotel if you head left from bus terminal into town and to the square a few streets back. There is a third hotel if you go right from the bus station along the main road out of town for about 1km, it is on the right. There is internet access down a side street to the main square above the shops and another at the far end of the road as you go left from the bus terminal.
If you arrive in work hours you should buy your food and drink provisions and head straight to the reserve, around 10km away. Go out the bus terminal left for a few 100m past the football field then take the road that doubles back up the hill from the direction you came, (there is a sign for the reserve). You can turn right from the bus terminal and get up the same hill via the road behind it but it is not signed this way. Follow the road up into the mountains. You will pass some houses in a compound on the left with a large pond in front, this is where you will stay, but first you have to go to the IBAMA office a couple of km further on on the right, just where the road forks, to show your permit and get the key. There may be complications here due to lack of communications between head office in Vitória and the office here, because this office has no phone or internet connection. I had a permit to stay up to 2 weeks, and the reserve director had received his copy by post (it was on his desk) but the accommodation was booked for the second week by researchers, who obviously have priority over birders and I was only allowed one week. Despite there been plenty of room to camp you are not allowed to. The visitor accommodation is as usual with IBAMA very good. It is a large house with 3 bedrooms with at least beds for 6 people, there is a modern gas cooker and freezer. 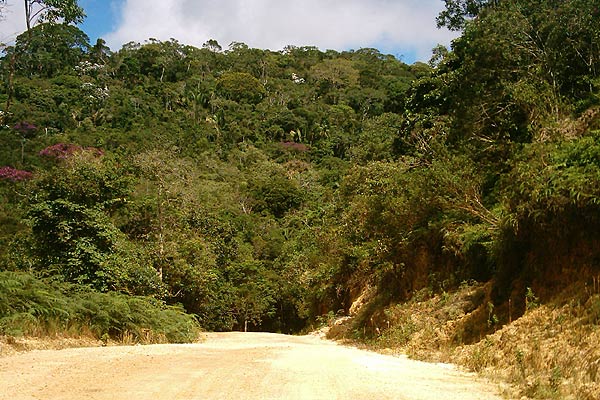 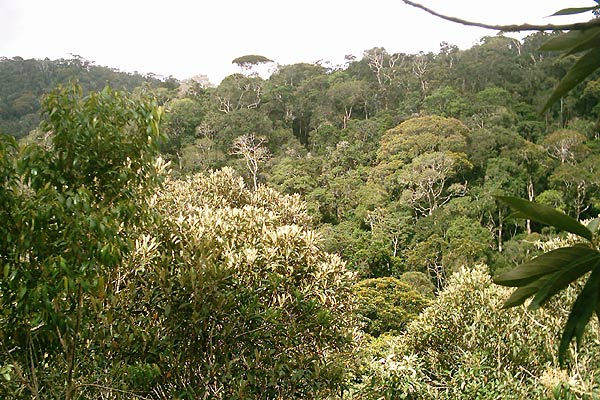 The main birding areas are along the roads. Going along the right fork past the IBAMA office you keep walking and birding for a couple of hours until you reach some coffee plantations, here the forest becomes more fragmented and degraded, go back the same. Just after the office about 1km there are several side trails into the forest, they are not easy to find are overgrown and difficult to follow. There are 2 trails on the right and one up the banking on the left, I found all too narrow and difficult to follow and the latter was especially bad for fallen trees, noisy leaf and twig litter.

Taking the left fork bird for a similar distance until the road takes a sharp steep down-hill, you have reached the edge of good forest.

Other options include walking the road back towards Santa Teresa, again after an hour you will reach a sharp twisting downhill, to a marsh, this is the edge of good forest.

Lastly but importantly there is a trail behind the office buildings; walk past the buildings and follow the trail into the forest a short way, where it branches the right fork goes to the water supply and is a dead end. The left narrow fork which heads into bushes and across a small stream looks unpromising but actually continues for 2-3km to a large waterfall. There is very good birding along here and three-quarters of the way along the path drops into a boggy dell with open under-storey (before you can hear the waterfall) it was here I heard then saw my only Russet-winged Spadebill. The call is diagnostic, (you will hear and see White-throated Spadebill often for comparison) and I located it perched at mid-height in the open but a little way back, and giving excellent views. On walking this path subsequently I never saw or hear another.

Continue along the path a bit further and as you hear the waterfall the path drops steeply to the pool at it base. This is the end of the trail and you have to return the way you came.

You should allow a day to visit Museu Biológico de Professor Mello Leitão (the Augusto Ruschi Museum) but not Sunday or Monday when it is closed, small entrance fee. Augusto Ruschi was the world renowned expert on Hummingbirds, particularly of Espirito Santo, and also a world expert on frogs. He died a slow death (several weeks) when in his 60s after handling a poisonous frog. The museum has well mounted hummingbirds and other birds and animals and good displays. There is a native bird aviary, and of course the hummingbird feeders at the administration building at the far end of the gardens from the entrance. There is also a shop selling refreshments etc as well as his collectable large books on hummingbirds and the birds of Brazil at unbelievably cheap prices (US$25 per volume).

REQUEST name of hotel in Santa Teresa across from bus station.