Town centre: De la Costa Hotel on Francia is a good quality, clean cheap new hotel ($15 a single per night) but is away from the centre. There is the new Rio Beach on Tomas Romero Pirreira which is a short walk from the main square and other more expensive hotels at the square. Encarnación does not offer the best birding, but there are a few good birds to be found with relatively little effort in and not far from the town centre (and we have created a species list of 155 in less than 6 months). The sites are mostly close to the main river the Paraná, and if you happen to have a day spare or are staying in town it could be well worth checking these areas out. None are formerly protected for nature conservation. Dealing with the town centre first, there are some good birds to be found around the plaza and the trees and scrub along the river edge. Around September, look out for Nacunda Nighthawks around the street lights near grass areas, particularly good is the area around the new market hall (La Plazita) as you head out of town on Route 6 (Fería Municipal). Also in this scrub Rufous-capped Antshrike has been found. Along the river about 1km W of the bridge to Posadas between the sand dredging quay along the railway to the station are areas of marsh and scrub, which can turn up the odd good bird (now destroyed). In August check migrant swallows for Chilean and from September on look out for Blue and Yellow and White-banded Tanagers. Various water-birds can be seen anytime. Further W from the bridge (about 4km in all) is the second and by far the best site Arroyo Mboi Kaé (see account below, but now completely destroyed). There is a larger marsh a little further on from here called Arroyo Quiteria, which no doubt has many good birds but is largely inaccessible due to the army base in front. The shanty nearby is also a smugglers haven for Argentina and may not be safe.

A few km E of the Posadas bridge is a religious sanctuary, SANCTUARIO ITACUA, ask for directions or take a taxi. It is popular and busy with locals for picnics on a weekend. Around the sanctuary are large areas of scrub and some patches of forest, with trails. Birding is quite good around here. The Hotel El Tirol, 12km N of Encarnacion, is dealt with in a separate account due to its importance.

This site was badly damaged in February 2006 and is now totally destroyed by the new dam and railway constructed alongside the road. 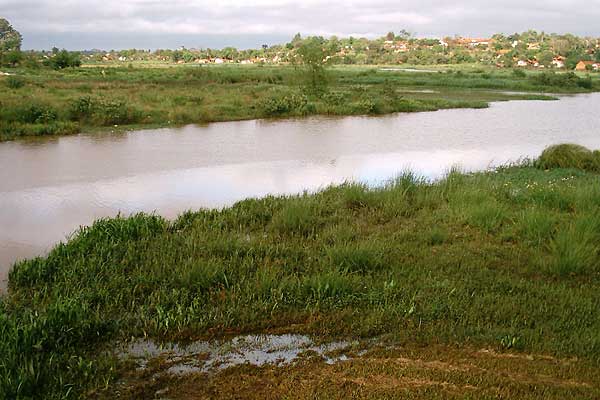 Accommodation in Encarnación, from town take Route 1 out NW 1km and park on the left, near a football field, before the first bridge out of town opposite a petrol station. The marsh is on the left along the tributary of the River Paraná, accessed by a path down the side of a fenced perimeter (slaughterhouse). The small area of grass and marsh between the shanty town and the river looks uninviting and unpromising due to the rubbish tip, slaughterhouse runoff and raw sewage from the shanty and the hacked bushes, burnt grass, grazing animals and hunters. However there are many good birds here which are readily found due to the small size of the site (c40ha). Also bird the scrub on the other side of the road. A couple of hours should easily cover the area and turn up a few good birds.

Walk the grass area alongside the football pitch towards the river (wellies/gum-boots are recommended for this site) before reaching the river scan the edges for Least Grebes, Blackish Rail and coots etc. Cut across this first section towards a sign, saying something like dam property do not build here. Behind the sign are some (probably hacked) bushes where the concrete drain from the slaughter house enters the marsh. Check here (and other scrubby bits) for Black and Rufous Warbling-Finch, Dark-billed Cuckoo, Chotoy Spinetail, Bay-capped Wren-Spinetail, Blackish Rail etc. Carry on down the side of the river and amongst the reeds looking for Unicoloured Blackbird, Yellow-rumped Marshbird, Masked Yellowthroat, Pale-breasted Spinetail, Crested and Warbling Doradito, Wren-like Rushbird, Spectacled Tyrant, Yellow-browed Tyrant, Greater Thornbird etc. In the grass area, look for Saffron Finch, Grassland Sparrow, Blue-black Grassquit and seedeaters, generally White-bellied, Double-collared and Rufous-collared. At the right time of year however rarer seedeaters might be found such as Capped, Tawny-bellied, Chestnut and Rufous-collared. Overhead raptors such as Snail Kite, Long-winged Harrier, all 3 caracaras, American Kestrel and Roadside Hawk can be seen. Also look for Monk Parakeets and Shiny Cowbirds and the various swallows which depending on time of year can include, Chilean, White-rumped, White-winged, Black-banded, Blue and White and Tawny Headed as well as Grey-breasted Martins.

Many Sought After Species, not strictly part of the Argentine Mesopotamian Grasslands but this marsh and others of southern Paraguay area share some of the more widespread threatened species including Sharp-tailed Tyrant (VU), Bearded Tachuri (NT), and 3 seedeater species.