On a recent tour with Paul Smith.

As usual there was plenty to see in the forest with activity continuing throughout the day. Highlights included several Pileated Parrot, Grey-rumped Swift, Yellow-fronted Woodpecker and Scaled Woodcreeper. We obtained great views of hard to see species such as Spot-backed, Tufted and Large-tailed Antshrikes, and shy canopy birds like Creamy-bellied Gnatcatcher, Blue-naped Chlorophonia and Sharpbill. At Estancia Kanguery (a natural grass area inside the park) a single Giant Snipe was seen in flight just after sundown and several more were heard calling, in addition to local specialities such as Lesser Grassfinch and Sedge Wren. 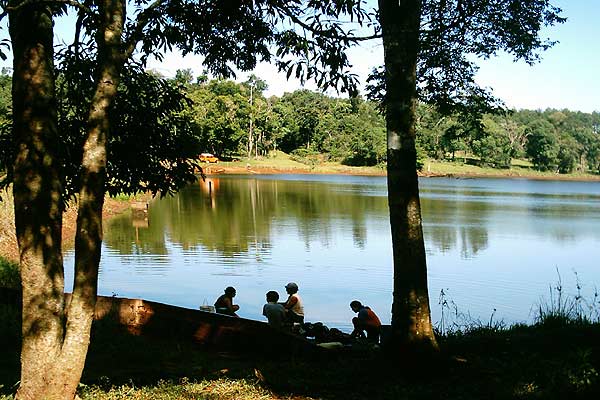 San Rafael lies 125km from the city of Encarnación. To reach it, approach via Brazil and Ciudad del Este in the NE or from Argentina and Encarnación in the S. From the latter take Ruta 6 north to Obligado and then leave the main road and head for the small village of Ynambú. To go by bus to Ynambu, take the Pastereo bus (₤2) from Encarnación terminal. There is a Pro-Cosara sign on the right just before the bus terminal, take this and follow until another such sign is seen on the right pointing down a dirt track, there are a further 3 signs directing visitors to the accommodation.

San Rafael is a great birding place and it is supposed to be a national park, the park was supposed to have been created in 1992 and the government who are supposed to manage the area do nothing. The original $50 million to demarcate and purchase the land for the park came from the World Bank, however to date not a single hectare has been purchased by the government for this reason. Instead the government has purchased land within the park and placed local ‘campesinos’ or landless poor on it, who cause destruction of the native flora and fauna. The government also reduced the original proposed size of the park from 78,000ha to 73,000ha, after angry land owners fearing their land would fall in the park boundaries quickly cleared their forest beforehand. Fortunately not all land owners were against the park and they came together with conservation organisations to form an NGO in 2001 to manage the park called Allianza para la Conservacion de la Reserva San Rafael. Amongst the NGOs involved in this were the Natural Land Trust and IDEA (Instituto de Derecho y Economia Ambiental). Problems continue to this day however, with fires on the increase and poaching of animals and valuable hardwoods a constant threat. For a more detailed look at the above points read the Winging It article at www.faunaparaguay.com/sanrafarticle.html
The only place available to stay at the moment is at the private reserve on the s side of the national park, which is called Pro-Cosara (Asociación Pro cordillera San Rafael) and run by Hans and Christine Hostettler (German speaking Swiss, also fluent in Spanish and some English), there may be other options for accommodation in the future.

Accommodation is in a dormer cabin with bathroom and large porch ($25.00 a night with 3 meals). This house has a double bed and a twin room, with a 5th spare bed and extra mattresses which could be put in the porch. The second option is a room in the hanger, which sleeps up to 8, with a separate bathroom in the hanger. Alchol can be purchased on site.

Around the fruiting trees at the accommodation Saffron Toucanet can often be found, very quietly and determinedly destroying the crop, along with other more obvious species such as Plush-crested Jay.

There are 2 main trails on the property of Pro-Cosara, within easy walking distance of the accommodation. The first of the paths to visit is the Sendero Suruku’a Sa’y Ju (Trail of the Yellow Trogon), which is on the right just as you enter the area of the buildings. The sign at the start says the trail is 450m long, though it is actually 650m. This area of forest has some large old trees but is mainly composed of taller younger thinner trees with a quite open canopy (typical of Alto Parana forest). The ground flora is dense, though the mid-storey is more open in some places. This dense ground growth hides many sought after species, most much more easily heard than seen. These include such species as Short-tailed Antthrush, Variegated Antpitta, Brown Tinamou, White-shouldered Fire-eye, Spot-winged Wood-Quail, Thrush-like Woodcreeper and Sooty Grassquit, Dusky-tailed Antbird. Mid-storey birds include Greenish Schiffornis, Drab-breasted Bamboo-Tyrant, Blue and Band-tailed Manakin and Southern Bristle-Tyrant. Higher up, some good birds are Streak-capped Antwrens, Black-throated and Surucua Trogon and Spot-billed Toucanet.

The second trail is the Sendero Urutau (Potoo Trail) located at the far side of the man-made 6ha lake, just off the road (look for the set back sign). This skirts around the lake and crosses the small stream that feeds the lake at the top end. The habitat is dense forest, with very good forest birding. The far end of this trail can be picked up at the lake side nearest to the accommodation, follow the track from the roadside (at several points) past the saw-mill and through the fir plantation and walk to the stream. There are several other small tracks to the right, which can be taken after the plantation, down to the lake side. These can be very productive as they go through various habitats including bamboo. Look out for over-flying parrots which can include Pileated Parrot. This is the best place to see Creamy-bellied Gnatcatcher, which is reasonably common. It is the only place we have ever seen the extremely difficult to find Blackish-blue Seedeater (once), but do not expect them! Olive Spinetail is occassionally encountered in bamboo, usually above head height, its distinctive trilling 'pippippi' call is the best guide. Look for Neotropical River Warbler near the stream. Other species well worth looking out for all round this area are Chestnut-crowned Becard, Chicli Spinetail, Large-tailed Antshrike, Rufous Gnateater, Long-tailed Tyrant and Three-striped Flycatcher. 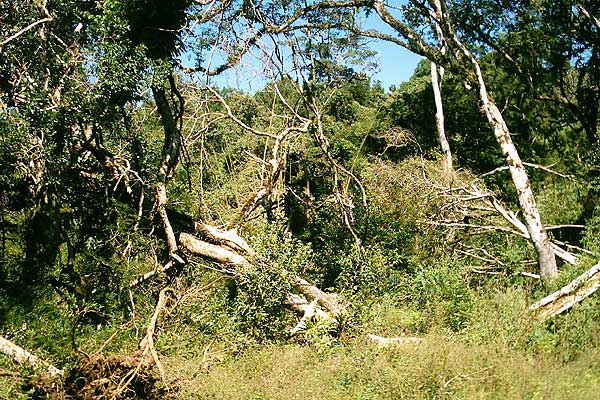 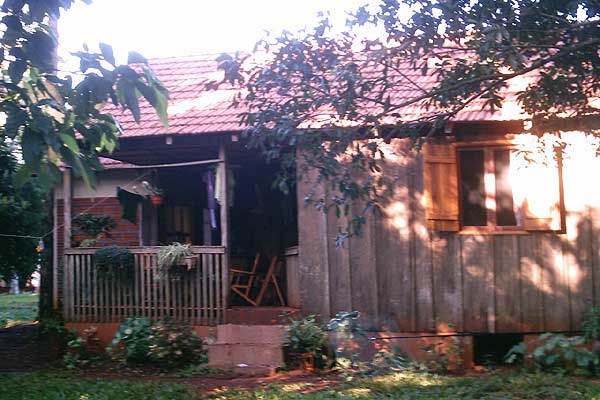 A trip deeper into the park requires a 4 wheel drive but will be very rewarding. One possible area to visit is the new Alliance camp, Camp Kanguery, which is located on the edge of forest and natural grasslands. These grasslands, though not cerrado, hold many species associated with that habitat (but not the real specialists such as Black-masked Finch) and are well worth a look for such species as Red-winged Tinamou, Grass Wren, White-tailed Goldenthroat, Lesser Grass-Finch, Lesser Yellow-headed Vulture, Cock-tailed Tyrant, Sharp-tailed Tyrant and in the wetter areas various seedeaters including Marsh Seedeater Capped Seedeater, Saffron-cowled Blackbird and Giant Snipe (best at evening prior to breeding season when their display can be observed, otherwise you would nearly have to tread on one to see it).

email This email address is being protected from spambots. You need JavaScript enabled to view it.

This park is a strong hold for such species as Russet-winged Spadebill and Ochre-breasted Pipit but these are local in distribution and it may be wise to consult with Guyra Paraguay staff first on the best location for this and other species. Several Tyrannulets are recorded here, including the sought after Sao Paulo, be aware however that this is a difficult species in every way, even if it is usually in the mid-storey and not higher as many species are. Far more common and apt to be confused are Yellow and Mottle-cheeked Tyrannulets.

Antshrikes, though maybe common are often difficult to see, Spot-backed and Tufted are best found in dense tangles, and play back helps. The confusing Grey Elaenia, though fairly common is easily overlooked in foraging flocks as it is tyrannulet like with an oft cocked tail. It is active and perches horizontally high up in the canopy.

In one month we recorded 235 of the 410 species on the list for the park without a vehicle (except for 4 days when it rained almost continually!). We saw the first 200 species in 8 days! Author: BSG

We visited this reserve with Guyra Paraguay staff who were sorting out acquisition of land nearby. We stayed at the ProCOSARA part of the reserve where lodging is available from a nice Swiss couple. It was very reasonable at G50,000 per person per day with 3 meals included. In this area there are 2 trails through the forest as well as good birding along some of the roads and at a large lake. A tornado had just hit knocking down many trees and the lower trail next to the lake was partially inaccesible. The best species I saw here was the Saffron Toucanet which comes to feed on fruiting trees around the buildings. When we were there, they could be seen in the morning on the small trees next to the Guardabosque building but apparently they move trees according to the fruiting times. Also on the upper trail we saw Creamy-bellied Gnatcatcher and Bay-ringed Tyrannulet. To visit the reserve (that may become a national park in the next few year) contact ProCOSARA at This email address is being protected from spambots. You need JavaScript enabled to view it. or visit the website at www.procosara.de I saw 104 species including 5 lifers