On a recent tour with Paul Smith. Laguna Blanca had been subjected to a recent extensive burning that had left much of the cerrado charred and a colourful carpet of regenerating plants were not attractive for birds. We did locate local specialities such as Masked Tityra, White-rumped Monjita, Rusty-backed Antwren, White-banded and White-rumped Tanagers, Red-legged Seriema, and Black-throated Saltator. However we had to search neighbouring properties for the big ticks, finding Cock-tailed Tyrant, Sharp-tailed Grass-tyrant, Rufous and White-winged Nightjar and Lesser Nothura after scouring suitable areas of habitat. Perhaps the highlight of the visit though was a winter adult Common Tern, a new species for Paraguay! 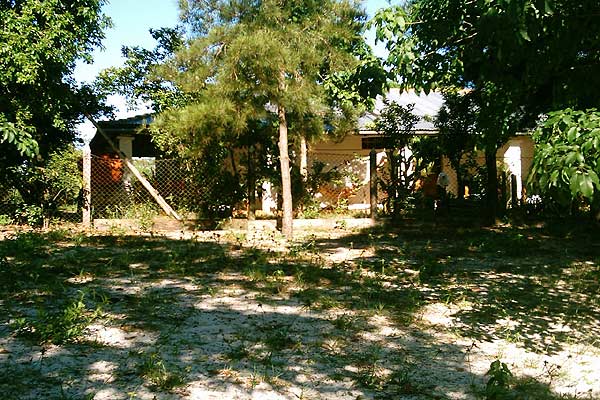 BSG October-February (October-November) Laguna Blanca is located in central Paraguay, in NE San Pedro Department, 28km E of the town of Sta Rosa del Aguaray. To reach it take the newly fully paved Route 3 from Asuncion, 270km E to Sta Rosa del Aguaray, here as you enter town take the right turn onto dirt roads and travel 21.7km to a right turn by a water tower. Take this turn and travel 2.2km to a crossroads, here turn left and go a further 3.8km to Rancho Laguna Blanca main gate (signed, note there are soya fields at the entrance to the ranch). This ranch is the only place offering accommodation at the lake; there are several hotels in Sta Rosa. Follow the dirt track through the property past the soya and through secondary humid forest until the lake is first visible. There is a left turn here, follow it to the gate and through the gate is the accommodation. Accommodation includes a ranch house (2 rooms sleeping 4 people each with a double bed in each room), campsite with toilet and shower block, and you can pay for cooked meals. Horse riding is available free! Accommodation costs US$25 including 3 meals a day (per person per night), or US$8 to camp with option to pay extra for meals. Note food is good but basic, if you want variety and food not available locally you will need to bring it with you. Straight across the road from the Laguna Blanca main gate is an unsigned bar with pool table. There is no internet access at Santa Rosa, but public use phones are available. 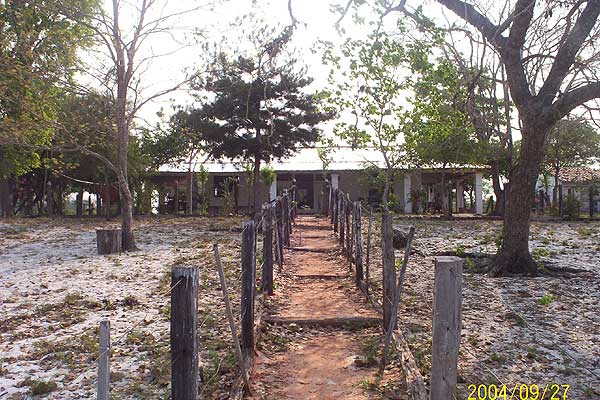 Laguna Blanca is situated where the reddish soils of the humid Paraná Atlantic forest meet the white sands and dry cerradon woods of the cerrado. Laguna Blanca is approximately 1km by 2km and is the only natural lake in Paraguay. Up until as recently as the mid-1970s most of the natural vegetation cover of the area was intact, however since then at least half the humid forest has been removed for cattle ranching, soya cultivation and settlements. The rate of destruction unfortunately shows no sign of slowing down and chainsaws and fires can be seen and heard every day wherever you go. To the E are the marshes of Arroyo Clementina and to the W marshes of the Rio Verde.

Nearly all the 10 globally threatened and 4 near threatened species that occur here, occur in the 26,000ha of cerrado, of which 18,000ha remains in an almost unaltered condition. The land tenure of the cerrado is split between several landowners. Some of the best cerrado and the white sand beach of the lakes west end are part of Rancho Laguna Blanca, owned by Malvina Duarte (see foot). This property extends over 2,505ha and also has some areas of humid forest (all selectively logged and much secondary) as well as some soya and a small area of unused pasture. Cerrado globally is the fastest disappearing major habitat in the world. It once covered 1.65m ha of internal South America, today only 5% remains completely natural and only 0.7% is legally protected. The cerrado contains a total of 837 species of birds (29 considered endemic), 144 mammal species (16 considered endemic) and 500 species of trees.

None of the habitat in this area is formally protected, despite a campaign by Guyra Paraguay (Birdlife partner) to rent Rancho Laguna Blanca for the very modest sum of US$300 a month which includes the ranch house. Considering the small cost, the threat to the cerrado habitat in general and the high number of threatened and near threatened species, it seems ridicules that this area is not already protected. The scope for ecotourism to this easily accessible site could possible even cover the costs, if the place were properly promoted. The star attraction here is undoubtedly the White-winged Nightjar, which occurs at only 3 known sites globally, with Rancho Laguna Blanca offering by far the best chance of seeing it (due to easy access, comparatively small and intact size of cerrado and stable population). A second almost as difficult a species, Lesser Nothura is also more readily found here than anywhere else.

The threats to the area are major and encroaching all the time, any ‘protection’ comes from individual owners. Although the better soils of the humid forest are the main target for conversion to agricultural use, the sandy soils of the cerrado are not immune from exploitation. Much cerrado in Brazil for example has been converted to pasture for cattle, which involves regular burning and the introduction of exotic (African) grasses, often with the use of chemical fertilizers and nutrients. These chemicals eventually flow through the porous soils and find their way into the lake, upsetting the natural balance and removing oxygen from the water through eutrophicization. Other threats come from the many landless people of the area (campesinos). These people enter the properties to fish, hunt, gather firewood and extract timber. It should be noted that water bodies in Paraguay are public property, so everyone has the right to fish (though not access to waterbodies over private land). Also the land was taken from the people of the area illegally under the previous dictatorship; about 95% of the land in Paraguay is owned by 1% of the population and many of the 8 million population are landless people. Arroyo Clementina has large introduced predatory fish.

Laguna Blanca habitats A basic knowledge of habitats will go a long way to quickly locating the specialist birds of any area. Cerrado is not just a single habitat but an ecoregion, a mosiac of habitats all merged together into one larger recognisable biome. Ecotones are areas of intergration between ecoregions and these add further to the biodiversity of an area. This is particularly relevant at Laguna Blanca, where the humid Paraná Atlantic forest growing on red soils meets the white sand soils of the cerrado. The cerrado is generally thought of as the South American savanna, and indeed grass areas are a major part. The different habitats are known as follows: campo limpo is open grassland, cerradon are the areas of dry semi-deciduous forest in the grasslands, campo sujo is grassland with bushes and cerrado senso stricto is low bush without grass. Cerrado can also be dominated with spaced Butia palms.

The laguna Blanca list stands at 289 species after our 1 month survey in October-November 2005 which added 36 species. These 36 included 2 more globally threatened species, Marsh Seedeater and Helmeted Woodpecker. The project recorded 213 birds species in total. If Dwarf Tinamou is rediscovered in Paraguay (where the type specimen was collected) it will probably be here, recordings of its voice (from Brazil) do exist. White-winged Nightjar is found in campo limpo or light campo sujo, the adult males’ ghostly white form is easily spotted methodically flying low back and forth while foraging.

Campo limpo or light campo sujo habitat is also right for Cock-tailed Tyrant, Black-masked Finch Sharp-tailed Grass-Tyrant and Bearded Tachuri. The latter 4 are particularly fond of the short (c30cm) tussock grass, that has few (c1-6) flower stems of 1.5-2m tall. The areas of grass that have flowered and now have dead straw coloured flower stems seem the most favoured, the denser the flower stems the better. Cock-tailed Tyrant and Black Masked Finch perch prominently, the other 2 often perch much lower down the stem, often below half way. They may not be visible on a single scan, it is advisable to move through the grass and make continuous scans through the grass. All 4 species roam widely, and an area where there is no activity one day may turn up all 4 the next.

Lesser Nothura is found in campo sujo, usually on higher ground with armadillo burrows (in which it hides).

The migrant seedeaters are most reliably found in October and November at the lake side marsh. Go from the house onto the beach and turn right to corner of lake (c600m), bird the forest edge, grass areas and marsh from here up to the wire fence and a little way beyond.

Helmeted Woodpecker is found in mature swamp forest next to the road. Enter the property at the gate and head left (c1km) to the first forest beyond the soya and the small patch of pasture, follow the short paths into the forest here.

Bare-throated Bellbird can be found in forest and forest patches, just follow the call. In areas of extensive forest beyond Laguna Blanca (40km) up to 8 of the national bird of Paraguay can be found and seen giving their amazingly loud calls.

Night birding is superb here, of the other night-birds besides White-winged Nightjar, Little Nightjar, which resembles Lesser Nighthawk were the commonest species. Paraques were most frequently seen on the vehicle tracks and in dense scrub areas Scissor-tailed Nightjar could also occasionally be found on the tracks. Grey Potoos are very common here, 8 in a night can be found regular, they are most frequently found giving their weird calls, but can be fairly easily located with a torch by their amazing eye-shine; perched vertically on a post or stump, often low down. The most difficult species to see is the forest dwelling Rufous Nightjar, while Chestnut-banded Nighthawk can often be found flying along the beach at the edge of the lagoon. Tropical Screech Owls were common and occasional Ferruginous Pygmy-Owls were found.


Other Fauna
There is much yet to learn about the mammals of this area as our project showed. We confirmed Maned Wolf and added several other species; before our study there were no small mammals on the list at all and this is probably the area where the most exciting discoveries are yet to be made.


Arthropods
There are huge numbers of butterflies, moths and beetles as well as mantises. Particularly striking is the 30+cm stick insect! No doubt most of these species are poorly studied and there are undoubtedly species new to science waiting for the trained eye. Unfortunately the huge stick insect, though uncommon, has already got its scientific name. Spiders include the ‘Black Widow’ seemingly a name given to any small poisonous spider throughout the world. This tiny red and black spider often makes its web across armadillo holes, so do not stick your hand down hoping to flush a reluctant Lesser Nothura!

Thanks to Guyra Paraguay, Paul Smith, Hemme Batjes and the rest!