National Grid NX 983296 54o39´/03o34´ N/A ha m, spit with rocky pier
One of the best seawatching vantage points in Cumbria, overlooking the the Solway Firth. Approach Workington from the s on the A595 or from the n on A596 onto A597 through town. Travelling n past Tesco to next roundabout, turn onto industrial estate and follow Curwen Road then Haverlock Road to the point car park. From here walk to the disused lifeguard hut on the small pier and seawatch the bay and outer estuary from here. Purple Sandpipers are always on the rock spit in front of the pier. 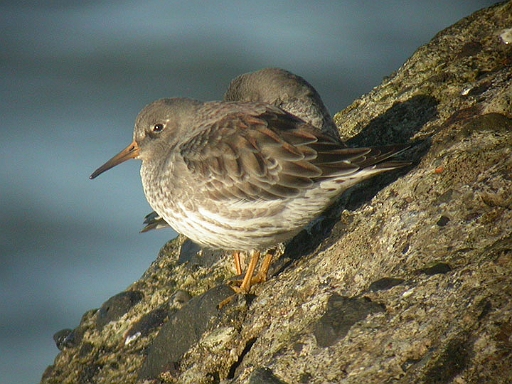 There is a good passage of overland skuas (going e) in spring. In spring and autumn there are birds such as storm-petrels and Manx Shearwaters (many of latter breed nearby on Isle of Man). Little Auks can be seen later in the year as can wintering Whooper Swans. Other seabirds include many of the commoner species, Guillemots, Razorbills, Gannets, divers, Great Cormorant, Shag, Eider and other ducks, geese and swans as well as waders such as Common Redshank and various gulls and terns etc.

Back in town at the Tesco roundabout but directly opposite, there is some waste ground where it is possible to park and with a bit of effort walk along the river. Dipper, Kingfisher and Grey Wagtail are found along here with minor rarity of Mandarin Duck recently.

Tesco itself never has any birds but the cafe there is good and cheap!

54o39´/03o32´ N/A ha m, inland ponds, marsh and reedbeds some scrub
From the roundabout on the A597 go e following the signs to Dunmail Shopping Centre. Turn in here and drive to the far end of the car park where the car sales garages are. Go to the right side of these garages through the gap to the nature reserve car park and park. There is a pond to check in front of the car park, and to the left is a sign for the tarmac walkway through the reserve. Turning right soon comes to a housing estate, but to the left there is a much longer easy walk overlooking the ponds, reedbeds marshes and scrub. Towards the far side is a disused railway embankment upon which much Gorse and other scrubs grow which are worth checking for migrants (the railway can be accessed from without the reserve from its west end).

At the extreme left end across the water is a hide which cannot be accessed from this end. Instead drive back to the road and drive west a short way to the paper mill (Iggesund Paper) entrance and drive in to the security post. Give your name and get a pass (free), park and walk to the hide. The hide is useful for staking out the wintering Bitterns, though these may be seen from any point at dusk flying to roost in the reedbeds.

Following Solway Road s and turning right after the football field in Salterbeck onto Shore Road which quickly dead ends at a small parking area overlooking the railway and sea just beyond. To the right is the small water of Salterbeck Resser, which can be quickly for various ducks, gulls and corvids. Following the path to the football field, there are usually more gulls to be searched through and this often turns up Mediterranean Gull. Ravens are often flying along the shore and Eastern Jackdaws are occasionally found. Around the industrial area Black Redstart is sometimes to be seen.

Carrying on further south on the Solway road in a few miles brings you to another area of Workington known as Low Harrington. As the road heads s round a bend there is a turning to the right onto Church Road which is short and goes under a bridge and then terminates at a parking area overlooking the harbour. Here are various gulls, ducks and Rock Pipit while out at sea movement can sometimes be worth studying.